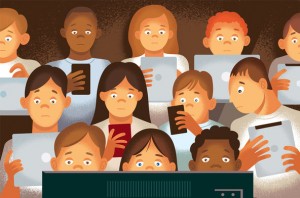 Excessive use of computer games among young people in China appears to be taking an alarming turn and may have particular relevance for American parents whose children spend many hours a day focused on electronic screens. The documentary “Web Junkie,” to be shown next Monday on PBS, highlights the tragic effects on teenagers who become hooked on video games, playing for dozens of hours at a time often without breaks to eat, sleep or even use the bathroom. Many come to view the real world as fake.

Chinese doctors consider this phenomenon a clinical disorder and have established rehabilitation centers where afflicted youngsters are confined for months of sometimes draconian therapy, completely isolated from all media, the effectiveness of which remains to be demonstrated.

While Internet addiction is not yet considered a clinical diagnosis here, there’s no question that American youths are plugged in and tuned out of “live” action for many more hours of the day than experts consider healthy for normal development. And it starts early, often with preverbal toddlers handed their parents’ cellphones and tablets to entertain themselves when they should be observing the world around them and interacting with their caregivers.

In its 2013 policy statement on “Children, Adolescents, and the Media,” the American Academy of Pediatrics cited these shocking statistics from a Kaiser Family Foundation study in 2010: “The average 8- to 10-year-old spends nearly eight hours a day with a variety of different media, and older children and teenagers spend more than 11 hours per day.” Television, long a popular “babysitter,” remains the dominant medium, but computers, tablets and cellphones are gradually taking over.

“Many parents seem to have few rules about use of media by their children and adolescents,” the academy stated, and two-thirds of those questioned in the Kaiser study said their parents had no rules about how much time the youngsters spent with media.

Parents, grateful for ways to calm disruptive children and keep them from interrupting their own screen activities, seem to be unaware of the potential harm from so much time spent in the virtual world.

“We’re throwing screens at children all day long, giving them distractions rather than teaching them how to self-soothe, to calm themselves down,” said Catherine Steiner-Adair, a Harvard-affiliated clinical psychologist and author of the best-selling book “The Big Disconnect: Protecting Childhood and Family Relationships in the Digital Age.”

Before age 2, children should not be exposed to any electronic media, the pediatrics academy maintains, because “a child’s brain develops rapidly during these first years, and young children learn best by interacting with people, not screens.” Older children and teenagers should spend no more than one or two hours a day with entertainment media, preferably with high-quality content, and spend more free time playing outdoors, reading, doing hobbies and “using their imaginations in free play,” the academy recommends.

Heavy use of electronic media can have significant negative effects on children’s behavior, health and school performance. Those who watch a lot of simulated violence, common in many popular video games, can become immune to it, more inclined to act violently themselves and less likely to behave empathetically, said Dimitri A. Christakis of the Seattle Children’s Research Institute.

In preparing an honors thesis at the University of Rhode Island, Kristina E. Hatch asked children about their favorite video games. A fourth-grader cited “Call of Duty: Black Ops,” because “there’s zombies in it, and you get to kill them with guns and there’s violence … I like blood and violence.”

Teenagers who spend a lot of time playing violent video games or watching violent shows on television have been found to be more aggressive and more likely to fight with their peers and argue with their teachers, according to a study in the Journal of Youth and Adolescence.

Schoolwork can suffer when media time infringes on reading and studying. And the sedentary nature of most electronic involvement — along with televised ads for high-calorie fare — can foster the unhealthy weights already epidemic among the nation’s youth.

Two of my grandsons, ages 10 and 13, seem destined to suffer some of the negative effects of video-game overuse. The 10-year-old gets up half an hour earlier on school days to play computer games, and he and his brother stay plugged into their hand-held devices on the ride to and from school. “There’s no conversation anymore,” said their grandfather, who often picks them up. When the family dines out, the boys use their devices before the meal arrives and as soon as they finish eating.

“If kids are allowed to play ‘Candy Crush’ on the way to school, the car ride will be quiet, but that’s not what kids need,” Dr. Steiner-Adair said in an interview. “They need time to daydream, deal with anxieties, process their thoughts and share them with parents, who can provide reassurance.”

Technology is a poor substitute for personal interaction.

Out in public, Dr. Steiner-Adair added, “children have to know that life is fine off the screen. It’s interesting and good to be curious about other people, to learn how to listen. It teaches them social and emotional intelligence, which is critical for success in life.”

Children who are heavy users of electronics may become adept at multitasking, but they can lose the ability to focus on what is most important, a trait critical to the deep thought and problem solving needed for many jobs and other endeavors later in life.

Texting looms as the next national epidemic, with half of teenagers sending 50 or more text messages a day and those aged 13 through 17 averaging 3,364 texts a month, Amanda Lenhart of the Pew Research Center found in a 2012 study. An earlier Pew study found that teenagers send an average of 34 texts a night after they get into bed, adding to the sleep deprivation so common and harmful to them. And as Ms. Hatch pointed out, “as children have more of their communication through electronic media, and less of it face to face, they begin to feel more lonely and depressed.”

There can be physical consequences, too. Children can develop pain in their fingers and wrists, narrowed blood vessels in their eyes (the long-term consequences of which are unknown), and neck and back pain from being slumped over their phones, tablets and computers.